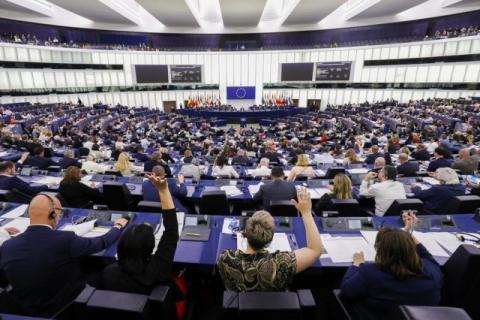 439 amendments were submitted to the draft report presented by the European Parliament's Rapporteur for Serbia, Vladimr Bilk, in April, and the parliamentary groups adopted 40 compromise amendments, which expanded the text of the report.
The European Parliament focused its report on Serbia on this year's call on Belgrade to "urgently" comply with the sanctions imposed by the EU against Russia and Belarus, and set that as one of the conditions for Serbia's further progress on the road to European integration.
"Serbian authorities are called upon to truly engage in the necessary reforms and return the country to the right path of European integration, thus fulfilling Serbia's European aspirations," the text reads.
​Viola von Cramon, MEP from the Group of the Greens/European Free Alliance, along with the Liberal MEP Klemen Groselj, Renew Europe Shadow Rapporteur for Montenegro, Serbia and Bosnia-Herzegovina, and several representatives of the Social Democrats in the European Parliament, are the authors of the largest number of amendments submitted to the report on Serbia, especially in the part related to cooperation with Russia.
After the vote in the Foreign Policy Committee, the report on Serbia will reach final plenary vote of the European Parliament in early July, when it will be adopted in the form of a legally non-binding resolution on Serbia.