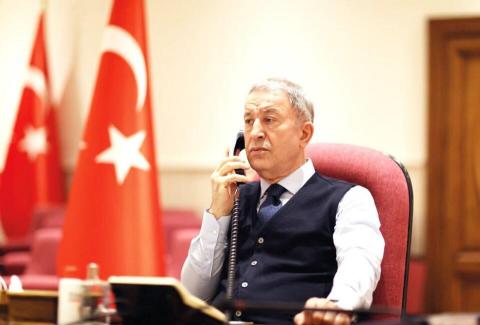 Turkey and Greece can resolve their problems only by establishing dialogue and direct contacts, Defense Minister Hulusi Akar has said, criticizing certain Greek politicians for escalating tension between the two neighbors for their political ambitions.

"The problems between the two countries cannot be resolved without talks, meetings, visits and dialogue. We want dialogue. Unfortunately, certain Greek politicians escalate tensions and support certain actions and rhetoric for their own political and personal ambitions," Akar said at a NATO Parliamentary Assembly meeting in Istanbul with the participation of Turkish and Greek lawmakers on June 14.

Turkey is not a threat to any country, including Greece, and is seeking peaceful ways to solve the problems over territorial waters, continental shelves, air spaces and other issues, Akar said.

"Instead of tackling these issues directly and with goodwill, our Greek friends chose to talk with the EU. They want to introduce our bilateral issues as the problems of the EU, the United States, or NATO," he stated.

According to private broadcaster NTV, a quarrel took place between Akar and a Greek lawmaker who accused Turkey of violating Greek airspace. In return, Akar informed the lawmaker that the Greek jetfighters violated the Turkish airspace over Dalaman and Datça multiple times on April 27 and that Turley responded to them back.

Akar also reacted to the Greek lawmaker who described Turkey as the occupying force in Turkish Cyprus. "If you start your speech by calling Turkey the occupant, then it means that you want a fight," he stated.