Bulgarian PM: The Topic of North Macedonia is a Distraction. Don't get caught in it! 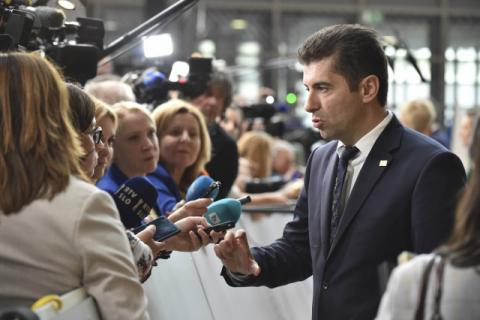 "The topic of North Macedonia was brought up today to distract attention. The news of the day is that the Interdepartmental Commission of the Ministry of Finance and the Ministry of Regional Development and Public Works discovered illegal constructions worth BGN 2.5 billion, and this money had to be paid through the budget increase requested by the regional ministry."

This was announced by Prime Minister Kiril Petkov after the cabinet meeting and called: "Don't get caught in it!".

The Prime Minister's reproach is directed at the Minister of Regional Development Grozdan Karadzhov from the quota of "There Is Such a People" - the formation, which from a coalition partner became an enemy of the government and allied with GERB, "Vazrazhdane" and DPS in order to demand the resignation of the current government.

Petkov pointed out that the commission had revealed gross violations - the construction of a 6-meter gutter was estimated at BGN 1 million, and the installation of 3 pillars at BGN 2 million.

"This shows that we have been right all along. And that is why today was chosen to talk about North Macedonia," he added.

The Prime Minister pointed out that the decision of the Council of Ministers on all important issues for North Macedonia to be decided by the parliament puts an end to the attempts of politicians to use the topic.

From the words of Kiril Petkov, it became clear that there is a connection between yesterday's news about the sending of German customs officers to the Kapitan Andreevo border checkpoint and the strengthened control there with the vote of no confidence from GERB.

"At this moment, the fight against the mafia continues. Do not fall into the traps of...