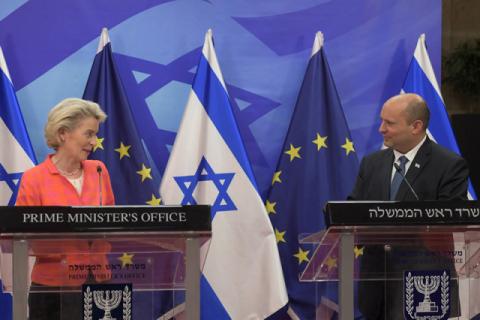 The European Union, Israel and Egypt have signed a memorandum of understanding for the export of gas from the Jewish state through the Arab Republic to Europe, Al Jazeera reported, quoted by BGNES.

According to the document, the agreement is for three years with an automatic extension for another two years.

The Maariv newspaper noted that Israel "could become a new source of gas" for the EU, as "the EU seeks to reduce its dependence on gas supplies from Russia". Speaking at Ben Gurion University in the Negev, southern Israel, where she was awarded an honorary doctorate, the EC chief said on Tuesday that the EU was ready to step up energy co-operation with Israel amid the current problems with Russia. She said Moscow's position on gas issues strengthens the EU's desire to seek alternative sources of energy.

Von der Layen met with Israeli Prime Minister Naftali Bennett in Jerusalem on the evening of June 14. The Israeli Prime Minister's Office said that the Prime Minister had "granted the request of the President of the European Commission for cooperation in the field of natural gas exports through Egypt to Europe". The office added that "the leaders have discussed strengthening Israeli-EU relations and reaffirmed the need to step up cooperation on innovation, climate change, environmental sustainability and many other areas." In addition, during the talks, Bennett "presented Iran's actions in the region and called on the international community to take decisive action against the Iranian regime and its accelerated progress in the development of nuclear weapons....