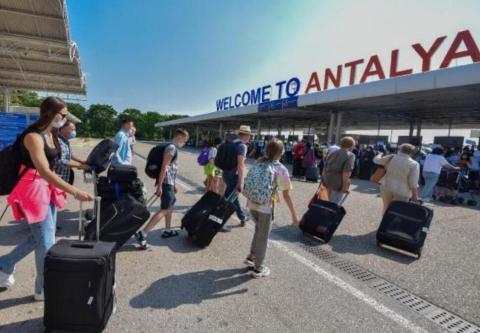 Antalya, one of Turkey's major holiday destinations, has welcomed 3.1 million foreign tourists since the start of the year.

Foreign tourist arrivals in the city, which is located on the Mediterranean coast, increased by 227 percent between Jan. 1 and June 12 from the same period of last year, according to data from the provincial directorate of culture and tourism.

Most foreign tourists who vacationed in Antalya since the start of 2022 were from European countries, the authority said in a statement, without providing a breakdown of the figures.

In the same period of 2021, Antalya hosted 949,182 international holidaymakers.

In the first 12 days of June alone, the number of foreign tourists visiting the province leaped 241 percent on an annual basis to 687,000 people, according to the provincial directorate of tourism.

International tourist arrivals in Turkey started to pick up this year after most countries relaxed travel rules as the COVID-19 situation improved.

According to the latest data the Culture and Tourism Ministry released, 7.4 million foreign tourists visited Turkey in the first four months of 2022, rising nearly 173 percent from the same period of last year.

Turkish hoteliers are hopeful that the country will greatly benefit from the revival of global tourism activities. The U.N.'s World Tourism Organization (UNWTO) reported earlier this month that tourism continued to recover at a strong...