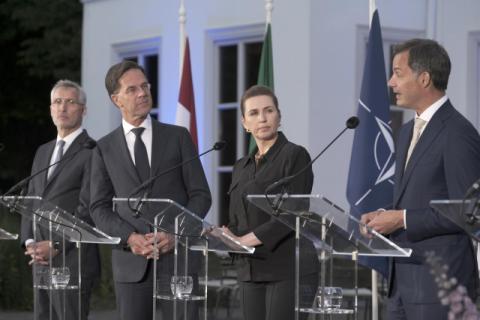 The leaders of seven NATO countries have pledged to support the accession of Sweden and Finland to the alliance and to provide more heavy weapons to Ukraine, the Associated Press reported.

They voiced support after an informal meeting at the official residence of Dutch Prime Minister Mark Rutte in The Hague, co-organized by Rutte and his Danish counterpart, Mette Frederiksen. The other leaders of the meeting were the president of Romania and the prime ministers of Belgium, Poland, Portugal and Latvia.

"My message regarding the membership of Sweden and Finland is that I strongly welcome it," said NATO Secretary-General Jens Stoltenberg, who also attended the meeting. "This is a historic decision. It will strengthen them, it will strengthen us," he added. But Stoltenberg also said the alliance must take seriously the concerns of Turkish President Recep Tayyip Erdogan, who has said he will not allow the two countries to join NATO until they change policies to support Kurdish fighters, whom Ankara considers terrorists. "There is no NATO ally that has suffered more from terrorist attacks from Turkey," Stoltenberg said.

Meanwhile, Polish Prime Minister Mateusz Morawiecki has criticized the support for Ukraine so far and has repeatedly called for more and heavier weapons to be sent to it. "We have not done enough to defend Ukraine, to support the Ukrainian people, to defend their freedom and sovereignty. And that is why I urge you, please, to do much more for the supply of arms and artillery to Ukraine," Morawiecki said. "Where will the trust be in us if Ukraine falls? Can we imagine that Ukraine will fall and we will go back to everything the old way? I hope we can't," he added.