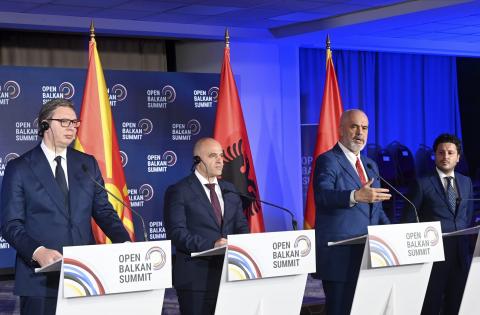 It's always a good idea to come to the fresh air and crystalline waters of Lake Ohrid, one of the most beautiful places in Europe.  Unfortunately, the reason for last week's gathering of leaders from the region - 'Open Balkan' - is not a good idea. In fact, it's not even a good name. Even officials are confused as to whether the name is 'Open Balkan' [which sounds like a command] or 'Open Balkans' [which sounds like a description].

In fact, Open Balkan is a form of participatory gaslighting, in which all the enthusiastic collaborators - except the leader - gradually incapacitate themselves, until they are powerless to resist the new order. As with any cult or fad, glaring inconsistencies are set aside.

First is the economic disparity.  Two of the three participants, Albania and North Macedonia, have GDPs that - combined - are barely half that of the main participant, Serbia. This means that while all three countries will benefit from a common market [or trading area], Serbia will always benefit more.

The Serbian market is bigger, and will always be able to attract more foreign investment [one of the aims of the common market in the first place], and produce higher value goods [for export inside and outside the regional market]. Wage differentials are not high enough to offset the advantages of investing in the largest and most advanced economy of the Western Balkans Six.

In other words, a rising tide will lift all boats, but one boat - Serbia — will become a ship.

The enthusiastic proponents of 'Open Balkan(s)' have apparently not contemplated the effects of imbalanced growth and productivity. This is surprising because such imbalances were one of the drivers of tension in former Yugoslavia, summed up in the bitter phrase uttered...