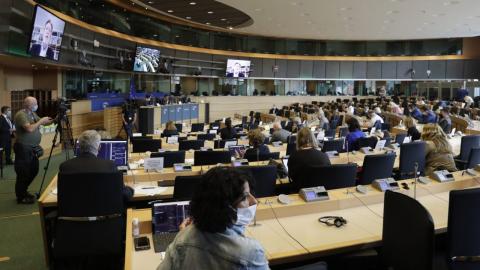 Vucic said that "these people do not respect their own negotiating framework", which he said only concerned the normalisation of relations between Serbia and its former province.

"Mutual recognition is their wish, it is nice that they want it, we don't want it and, as I said, everyone [should mind] their own business," Vucic added on Wednesday.

AFET adopted the report of the European Parliament's rapporteur for Serbia Vladimir Bilcik's at its session on Tuesday.

Bilcik said that, following the April 2022 elections in Serbia and Russia's February attack on Ukraine, "it is my genuine wish that our partners in Serbia understand the sense of urgency in moving forward on their European path.

"The 2021 report reflects the political reality in Serbia with a particular focus on the importance of ongoing reforms and alignment," he said.

"We note that more can be done to move decisively towards the EU and, as the European Parliament's rapporteur, I stand ready to work together with the new leadership in Belgrade in order to help achieve positive change for a European Serbia," he added.

This report will be up for a vote in the European Parliament in July.

Serbia has refused to back Western sanctions on Russia over its war in Ukraine.

Serbian Interior Minister Aleksandar Vulin said, after the voting in AFET, "that it is the right time for military neutrality to grow into political neutrality".