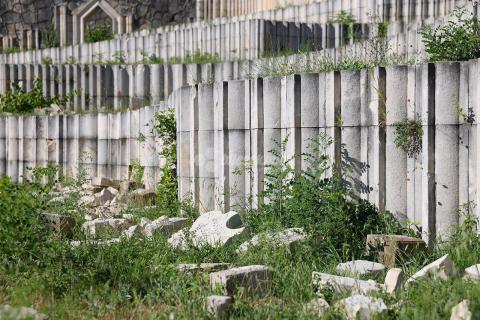 "Even in the middle of the [1990s] war [in Bosnia and Herzegovina], local fascists did not thoroughly devastate the Partisans' Cemetery as they have done now," said Dragan Markovina, a historian from Mostar who discovered the damage and posted pictures of it on his Facebook page.

Denis Zvizdic, the speaker of the House of Representatives of Bosnia and Herzegovina's parliament, described the attack as a "neo-fascist rampage".

Zvizdic said that it sent out the "ominous message" that neo-fascists "do not accept European and civilised values".

The Partisan Memorial Cemetery has the status of a national monument but has been neglected and decaying for years since the collapse of Yugoslavia. It has often been targeted by vandals and defaced with hate graffiti by right-wing extremists.

Police in Mostar have been notified about the attack and an investigation to find the perpetrators is under way.

Mostar's mayor Mario Kordic said that while the city administration is preparing projects to protect and revitalise local cultural monuments, "a group of vandals is systematically destroying them".

He also added that the city administration will cover the restoration of the monuments, but rebuilding 700 tombstones will take a long time.

The vandalising of the cemetery came a month after an association of anti-fascists in Mostar appealed to mayor Kordiv to stop the destruction of the monument. The association claimed that four months ago, it also requested a meeting...