Debates in Bulgaria’s Parliament Today: “The Mafia wants its State Back” 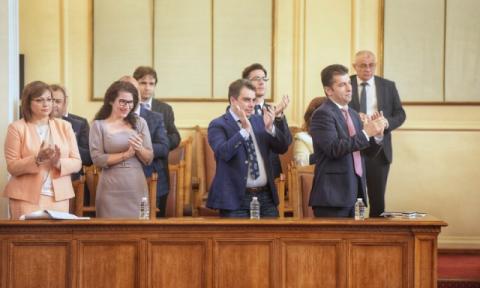 Today, the parliament is debating the requested resignation of its chairman Nikola Minchev. The request was initiated by "There Is Such a People" and supported by GERB, the "Movement for Rights and Freedoms" (DPS) and "Vazrazhdane".

In his reasons, Toshko Yordanov ("There Is Such a People") pointed out the constant non-fulfillment of obligations, systematic and gross violation of the rules, exceeding rights. The reason is that the hearing of the resigned Foreign Minister Teodora Genchovska on the topic "Macedonia" did not take place in closed session yesterday.

"We Continue the Change" replied that Minchev was simply fulfilling the will of the hall to open the meeting.

At the time when Yordanov was speaking, Nikola Minchev entered the hall and was greeted with long applause.

"The mafia wants its state back."

He pointed out that everything is happening a few days after the criminal schemes at border checkpoint "Kapitan Andreevo" were stopped, the money in the Ministry of Regional Development and Public Works was cut and a signal was given that the Anti-Corruption Commission will start working.

"One thing is clear - it's about money. This is a showy attack on the speaker of parliament," Gyurov said.

He pointed out that Minchev is a brilliant lawyer and guardian of political morality, which has been recognized by all.

"The Macedonian scenario is false. A fabrication of the man on the couch who wanted to sell the national interest in exchange for US visas," Gurov said.

"Today, the mafia will count the votes in the hall. There is still time to stand on the right side of history," Gyurov added.