Pahor writes to Michel over candidate status of Bosnia-Herzegovina 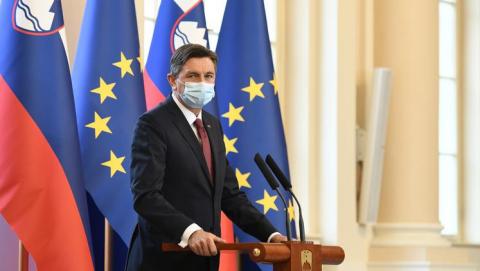 Ljubljana – President Borut Pahor has sent a letter to European Council President Charles Michel calling for Bosnia-Herzegovina to be granted the EU candidate country status without any conditions. Pahor believes this would strengthen the pro-European forces in the country and the pace of adjustment to the European norms.

The president believes that, in the light of the war in Ukraine, tangible steps need to made for the EU to enlarge to the Western Balkans as soon as possible, the president’s office said in a press release on Thursday.

Pahor supports the efforts to give Ukraine and Moldova the EU candidate country status, while expressing concern about the Western Balkans, “for which we have always been providing European perspective in a declaratory manner.”

According to the president, these prospects are being moved “further and further away”, and the negative consequences of this are the most noticeable in Bosnia-Herzegovina, where “nationalist forces and tendencies to change borders are growing”.

This leads to instability that threatens not only the country, but also the wider region and the EU, Pahor said, calling for a different order in the accession process – granting of the candidate status first, and then fulfilment of the conditions.

The Slovenian president also called for the approval for the start of accession negotiations with North Macedonia and Albania in June and visa liberalisation for Kosovo. He would also like to see talks with Serbia and Montenegro proceed faster.

“I sincerely believe that the EU is the answer to all the issues of the Western Balkans,” Pahor adds in the letter to Michel.

He first spoke about the initiative to grant Bosnia-Herzegovina the EU candidate country status without any conditions at the Munich Security Conference in February, and also presented it at the Sarajevo Business Forum in May.

The post Pahor writes to Michel over candidate status of Bosnia-Herzegovina appeared first on Slovenia Times.