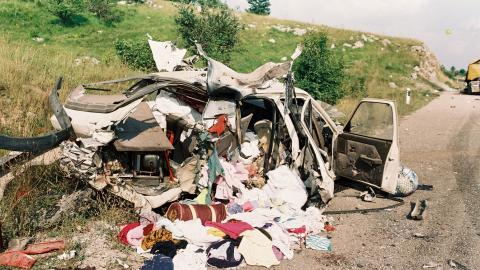 Witness 56 did not take the same route as a large convoy of Serb refugees who were fleeing from Knin into Bosnia and Herzegovina, and said he was able to see an air attack on the long line of vehicles.

"On about 7th or 8th August, 1995, while he was in Bosanski Petrovac, Witness 56 saw evidence of the convoy being bombed as it was moving towards Bravsko [in Bosnia and Herzegovina]," says a summary of his statement that was read out in court during a trial at the International Criminal Tribunal for the Former Yugoslavia, ICTY.

Witness 56's statement was cited in the trial of Croatian Army generals Ante Gotovina, Mladen Markac and Ivan Cermak, who were indicted for killings, deportations and the inhumane treatment of Serb civilians during Operation Storm. They were all acquitted.

Twelve civilians have been identified as having been killed in the two attacks, including four children.

Evidence about the crimes was mostly gathered by anti-war NGOs. But Croatia has never prosecuted anyone for this crime and recently former Croatian minister Mate Granic attempted to justify the strikes as a legitimate military operations that caused "collateral damage".

In May this year, the Serbia decided to prosecute...