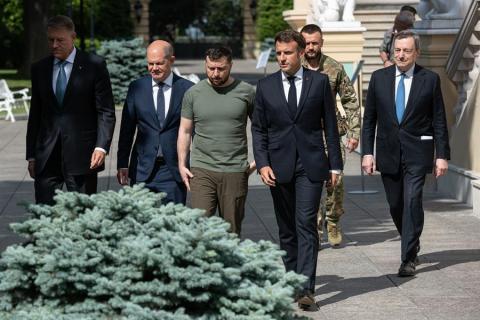 The European Commission will meet on June 16 to give its fast-tracked opinion on Ukraine's bid for EU candidacy, a step closer to membership for the country a day after the bloc's most powerful leaders visited Kyiv as it battles Russia's invasion.

Never before has an opinion been given so quickly on EU candidacy, which must be approved by all 27 member states.
The opinion will serve as a basis for discussion at next week's EU summit, where leaders are expected to approve Ukraine's candidate status, but with stern conditions attached, and membership may take years or even decades.
France, Germany, Italy and Romania are all in favour of Ukraine receiving "immediate" candidate status, French President Emmanuel Macron said in Kyiv Thursday.

Macron, German Chancellor Olaf Scholz and Italian premier Mario Draghi arrived in Ukraine by train and headed to the Kyiv suburb of Irpin, scene of fierce battles early in the brutal war.
Later joined by Romania's President Klaus Iohannis, they met Ukrainian leader Volodymyr Zelensky, who has been lobbying allies for more and faster weapons deliveries and the promise of a European future.
"The most important message of our visit is that Italy wants Ukraine in the EU," Draghi said at a joint press conference.
Scholz said Ukraine "belongs in the European family" and that Berlin would continue to send Kyiv weapons "for as long as it is needed."

After meeting the visiting leaders, Zelensky said he explained to "our essential needs in the field of defence".
"We are expecting new deliveries, above all heavy weapons, modern artillery, anti-aircraft defence systems," he said, even as Macron said France would send six Caesar self-propelled howitzers to add to the 12 already deployed on...