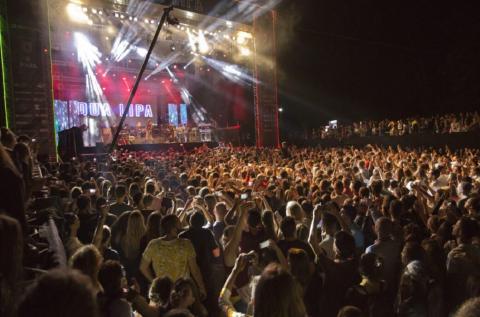 An international music festival founded by the father of singer-songwriter Dua Lipa to promote his native Kosovo has led to recriminations for the small European country after it lost the event to neighboring Albania.

The Sunny Hill Festival made its debut in Kosovo's capital, Pristina, in 2018 and took place again in 2019, bringing artists like Miley Cyrus, Calvin Harris, Martin Garrix and Action Bronson to one of Europe's youngest and poorest nations. British-born Dua Lipa also was a featured headliner.

Dukagjin Lipa, the singer's father and manager, said the festival brought Kosovo priceless publicity, including coverage in more than 500 international media outlets. The event was put on hold in 2020 and 2021 due to the coronavirus pandemic.

It is set to return this summer, but Lipa said late June 14 that "after a long wait, many efforts, requests," he'd made "a difficult but necessary" decision to stage the Aug. 4-7 event in Albania's capital, Tirana. He said a political dispute between Kosovo's ruling party and the one in power in Pristina prevented organizers from getting permission to put on the festival.

He and the festival's other directors had spent three years trying to convince the national government to allow them to manage a 17-hectare (42-acre) area of parkland and to build the appropriate infrastructure for the annual festival. They also did not receive permits for the August festival.

Pristina Mayor Perparim Rama, of the opposition Democratic League of Kosovo, favored having the music festival. He accused the national government, which is led by the Self Determination Movement!, of delaying the decision and trying to change the city council's decision.