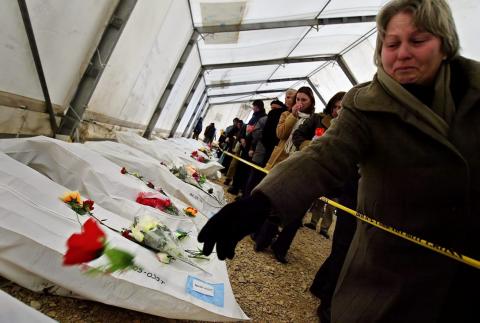 Kosovo's Institute of Forensic Medicine began a new exhumation of a suspected war grave this week in the mountain village of Koshare/Kosare in the west of the country as the authorities stepped up efforts to find around the remaining missing persons from the 1998-99 war.

Exhumations at six other locations have recently been completed, but the remains of only one person were found, the head of Kosovo's Missing Persons Commission, Andin Hoti, told BIRN.

"For June and July, some exhumations in different cities are planned, but because of the emotional burden on the families of missing persons I cannot mention all the locations," said Hoti, whose father was one of those who disappeared during the war.

The one recent exhumation that did yield results was at a graveyard in the village of Leshan/Lesan in the Suhareka/Suvareka municipality. The EU rule-of-law mission in Kosovo, EULEX, told BIRN that the search was launched after "a person saw the remains on the surface while opening a new grave at the cemetery". The remains of the body that was found have now been sent for DNA analysis and identification.

The other recent exhumations took place in the Lumbardhe neighbourhood of the city of Mitrovica, the villages of Planjan/Planjane and Gjonaj in the Prizren municipality, and the villages of Hubovc and Moqara/Mocare in the Kamenica Prizren.

As well as the newly-launched exhumation in Koshare/Kosare, a village nestled in a hard terrain between Kosovo and Albania, orders from Kosovo's Special Prosecution Office are still pending for searches of terrain in the villages of Has in the Prizren municipality, Javor in the Malisheva/Malishevo municipality, and Llapushnik in the Drenas/Glogovac municipality.

There has been speculation that...