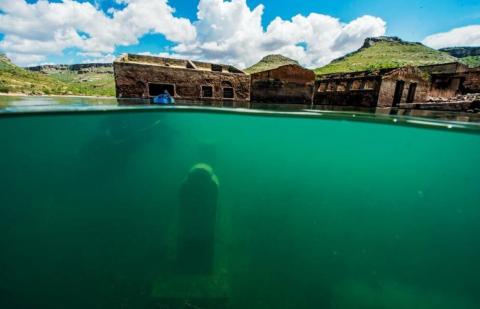 An exhibition, titled "Mesopotamia," has been launched in Italy to promote the provinces in Türkiye's southeastern region.

The exhibition, which the Italian town of Orvieto hosted first, features underwater photographs from the different sites in the provinces of Gaziantep, Adıyaman and Şanlıurfa.

The Silkroad Development Agency (İKA) invited underwater photographers, including Tunç Emre Karakoyunlu, Yavuz Pilevneli and Mehmet Öztabak to the region to take pictures of those sites as part of the promotion project.

They photographed the submerged tombstones, trees, wells and houses.

"We are promoting nine provinces in the southeastern Anatolian region under the "Mesopotamia" brand under the coordination of the Industry and Technology Ministry, the Culture and Tourism Ministry and development agencies," said Burhan Akyılmaz, general secretary of the Silkroad Development Agency.

The purpose of the project is to promote this region's recognition in target tourist markets, he added.

As part of those efforts, foreign journalists, people from tour operators and travel agencies have been invited to the region, Akyılmaz noted.

Officials from 20 travel agencies from five nations, mostly from the Scandinavian countries visited those provinces and following the visit, four Scandinavian companies decided to launch 9-day tours to the region starting in September, he said.

"The photography exhibition in Italy aims to introduce and promote the beauties which submerged under the water from the construction of the Atatürk and Birecik dams. The exhibition will last for one week. We want to introduce our region to Europe via Italy, through art and through photographs," Akyılmaz said.