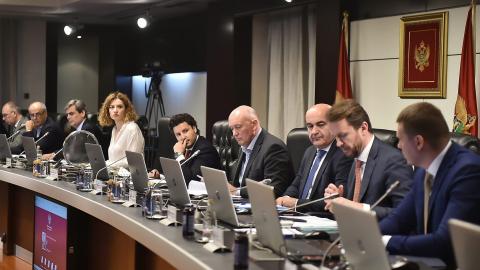 During the government session on Friday, Social Democratic Party ministers complained that they had not been kept informed about the Ministry of Justice's negotiations with the Serbian Church, the largest faith group by far in the country.

"I will not agree to political blackmails", he added.

Montenegro has signed several "fundamental agreements" with smaller religious communities: with the Catholic Church in 2011, and with the Islamic and Jewish communities in 2012. But no agreement has been reached with the Serbian Orthodox Church.

The former government failed to sign a fundamental agreement even though the final draft had been sent to the Serbian Orthodox Church, which has to decide on a signing.

On January 15, the Serbian Church's Patriarch, Porfirije, said the Church's legal experts believed there was room to improve the agreement.

The new ruling majority is divided on relations with the Church. Abazovic's Black on White bloc and the pro-Serbian Socialist Peoples Party insist on the signing of the fundamental agreement.

But President Milo Djukanovic's former ruling Democratic Party of Socialists, DPS, and the Social Democratic Party are concerned about the deal and accuse the Church of promoting Serbian nationalism and of undermining Montenegrin statehood.