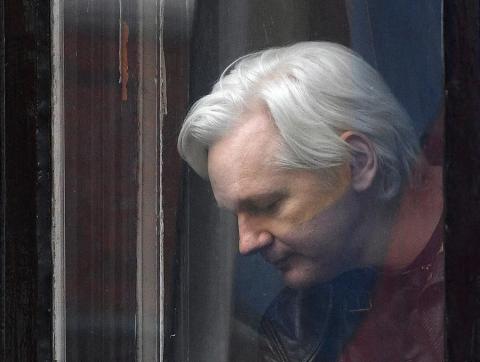 Supporters of Julian Assange on June 17 vowed to fight his extradition to the United States after Britain approved a US request for the WikiLeaks founder to face trial over the publication of secret military files.

"We're not at the end of the road here. We're going to fight this. We're going to use every appeal avenue," Stella Assange, who married the Australian publisher earlier this year, told reporters.
His lawyer, Jen Robinson, urged US President Joe Biden to drop the charges and called on the Australian government to press for her client's release.
"We will appeal this all the way through the British courts and if necessary to the European Court of Human Rights," she added.
The Assange case has become a cause celebre for media freedom and his supporters accuse Washington of trying to muzzle reporting of legitimate security concerns.
He is wanted to face trial for violating the US Espionage Act by publishing military and diplomatic files in 2010 and could face up to 175 years in jail if found guilty, although the exact sentence is difficult to estimate.
The UK interior ministry earlier announced that Home Secretary Priti Patel had approved the extradition order but that he had 14 days to appeal.

That sets up yet another court hearing in the long-running legal saga, which began in 2010 after WikiLeaks published more than 500,000 classified US documents about the wars in Iraq and Afghanistan.
His supporters have held frequent rallies to protest the planned deportation, accusing Washington of a politically motivated campaign as Assange, 50, had exposed US war crimes and a cover-up.
WikiLeaks said the decision was a "dark day for press freedom and for British democracy" and alleged that Assange had been on a CIA...