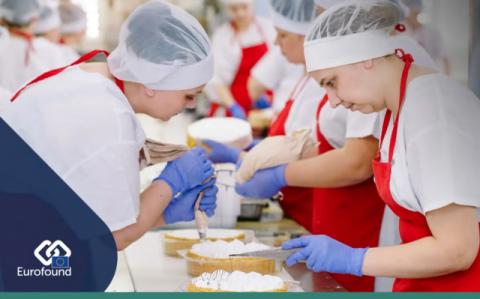 Against the background of inflation affecting European countries, minimum wage workers in 15 out of 21 Member States with statutory minimum wages registered a decline in their wages in real terms between 1 January 2021 and 1 January 2022. This was despite comparatively large increases in nominal rates in the EU during the period.

The impacts of inflation on low-wage earners is an important aspect of Eurofound's Minimum wages in 2022: Annual review, published shortly after the political agreement on adequate minimum wages between the European Parliament and the EU Member States. Eurofound's report shows that there are already signs that the proposed directive is having a positive impact, with some actors refocusing debates on the topic, preparing possible modifications to the system or criteria for wage setting, or uprating wages in line with 'international reference values' mentioned in the proposal.

In nominal terms statutory minimum wages increased to a greater extent than in the previous year in most Member States. In five central and eastern European Member States, the percentage increase in statutory rates reached two digits: Hungary (19.5%) and Lithuania, Estonia, Romania and Croatia (all more than 10%). In the pre-enlargement Member States, minimum wages generally increased more modestly, with the largest increases reaching 4-6% in Portugal, Spain and Belgium.

However, inflation has reversed the impacts of these increases in most Member States. If present inflation trends continue, minimum wages will barely grow in real terms in any country in 2022, and significant losses in the purchasing capacity of minimum wage earners will become a dominant theme - unless the issue is addressed by additional uprates or other support...

Portugal at last gets to marvel at its crown jewels

US preparing to deploy monkeypox vaccines amid more probable cases