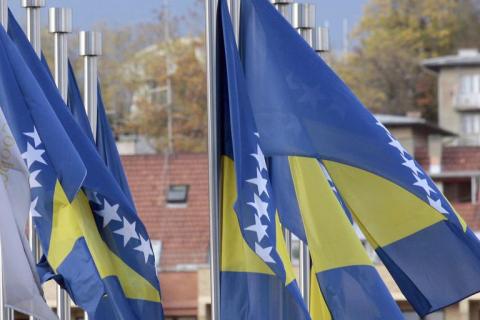 Brussels – Slovenia has produced a proposal to grant Bosnia-Herzegovina EU candidate status as early as at the EU summit next week. Foreign Minister Tanja Fajon will present it to her EU counterparts on Monday at a session of the Foreign Affairs Council in Luxembourg.

The proposal obtained by the STA shows that Bosnia would be awarded the status at the 23-24 June summit, which will be attended by PM Robert Golob.

Golob suggested during his Brussels visit earlier this week that he will propose awarding Bosnia-Herzegovina the candidate status.

Under the proposal, Bosnia would have to adopt the laws set out in the political agreement reached by Bosnian political parties at talks in Brussels a week ago before accession talks could start.

Once these laws enter into force, negotiating chapters 23 on justice and fundamental rights and 24 on justice, freedom and security could be open.

The other negotiating chapters would be opened once Bosnia has met the criteria set out in the Brussels agreement in the area of elections and other relevant areas.

As sources at the EU told the STA, Minister Fajon will, if she gets the opportunity, present the proposal at Monday’s meeting of EU foreign ministers.

This week, he outlined the initiative in a letter to European Council President Charles Michel, while he is expected to seek support for it at the Three Seas initiative summit in Latvia on Monday.

The post Slovenia wants Bosnia to get candidate status at next week’s EU summit appeared first on Slovenia Times.