Albania PM to Submit Resolution in Strasbourg Against Marty Report 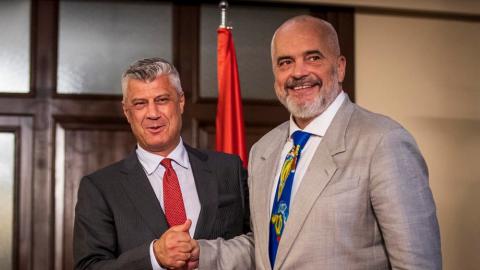 During a joint meeting on Monday in Pristina between the governments of Kosovo and Albania, Prime Minister Edi Rama said that he will personally submit a report to the Council of Europe in Strasbourg being prepared in Albania's parliament querying the Dick Marty report and what he alleged was its Russian influence.

The Swiss rapporteur's report for the Council of Europe in 2010 accused leaders of the Kosovo independence war of war crimes and organ trafficking and played a direct role in the subsequent arrest of former Kosovo President Hashim Thaci and others.

"We are preparing a resolution in the Albanian parliament and I will personally go to Strasbourg, in the first case, I hope in September, to address the Council of Europe about a fact which is becoming more and more disturbing in my point of view and our point of view, which is the total unfoundedness of Dick Marty's report as well as Russian influence on this tale of a yellow house and organ trafficking," Rama said to journalists.

Rama visited former president Thaci in May in the Hague prison where he awaits trial over war crime allegations contained in the report, and paid a visit to Thaci's family in his home village of Buroje of Skenderaj/Srbica municipality.

On 9 June, the Kosovo Specialist Chambers war crimes court in The Hague extended the detention of Kosovo's ex-President and ex-parliamentary speaker Kadri Veseli, citing concerns that they might abscond or interfere with witnesses.

Thaci was political director of the Kosovo Liberation Army, KLA, and became Kosovo's president in the post-war period.

Veseli was head of the KLA's intelligence service and later became a parliamentary speaker. He was a leader of the opposition Democratic Party of Kosovo, PDK, at...