Bulgarian President: The French Proposal for North Macedonia is the Best and Fairest so far 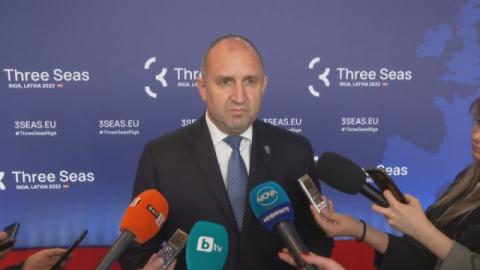 "The proposals of the French Presidency are the best so far, I'm not just talking about Bulgaria - they are the fairest. (...) Let it be clear: we really have progress for a change in the constitution of North Macedonia and the entry of Bulgarians into the document, which I have been insisting on for a long time. It is already accepted for this to happen".

This was stated today by Bulgarian President Rumen Radev during his visit to Latvia. He stressed that this is not about a Bulgarian minority in our western neighbor, but about the equality of Macedonian Bulgarians, which they deserve and which is required by the Copenhagen criteria.

What did France offer us to let Macedonia join the EU

"For a year now, we have been persistently fighting - both as Bulgaria's representative in the EU and the two caretaker governments - to raise bilateral issues to EU level and a negotiating framework. This is not just a bilateral historical dispute between Bulgaria and North Macedonia, as it appears. These are issues that are undermining the EU's foundations. Finally, after much debate, our European partners have realized that this is the place to address these issues, and our demands are already being addressed in the negotiating framework as an approach," he said.

The head of state said that if the framework position of Bulgaria, adopted in 2019, will be changed in any way, the Council of Ministers, with the expertise of the Foreign Ministry, should update the framework position with its decision and only then send this position, which reflects the decision of the French Presidency, in Parliament - to be approved. According to Radev, "the current approach cannot work":