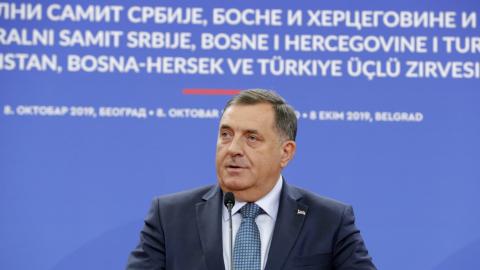 Member of the presidency of Bosnia and Hercegovina Milorad Dodik talks at the press conference. Photo: EPA-EFE/ANDREJ CUKIC.

An agreement on partnership, trade and cooperation between Bosnia and Herzegovina and the UK was accepted by the Bosnian Presidency but without a consensus of all three members.

The Serbian presidency member Dodik insisted that the treaty would be bad for Serbs in Bosnia and Herzegovina.

Out of 62 deputies present at the special session, 51 voted to support the UK-BiH agreement, no one was against, while 11 MPs abstained.

Right after the assembly session, Dodik posted on his Twitter profile that the Bosnian Serb opposition parties had "voted against Srpska", meaning the Bosnian Serb entity, Republika Srpska.

Four other countries in the Western Balkans have already signed a similar trade deal, while Montenegro is in the final stages of an agreement

Dodik had cited the constitutional mechanism "of vital national interest" to block the deal - a tool used to block and slow down decision-making processes in Bosnia.

Dodik has lost support over other decisions as well lately, such as on the establishment of embassies and on Republika Srpska's participation in a state literacy test, which he also opposed.