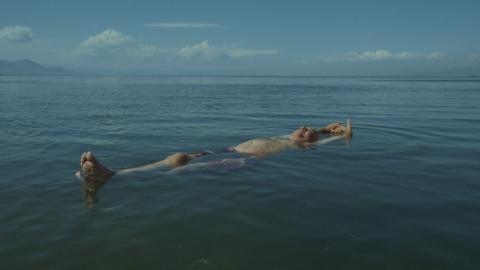 A quarter of a century later, Gjini has recreated the swim, this time for a feature documentary called 'Freestyle to Montenegro', directed by Ardit Sadiku.

The film has made a 'splash' in the Balkans since premiering in 2021, notably in Belgrade, once the capital of the Yugoslav state that was also communist but with a level of freedom unlike anywhere else in Eastern Europe at that time.

Sadiku, who was not born, when Gjini made his swim, said he was drawn to the story as one man's extraordinary struggle for freedom, but also as a way to remind viewers of what life was like not so very long ago.

"It is very important for us to speak about the past because we have buried it," said the 31-year-old filmmaker. "We tend to think it won't be repeated, but you never know. By speaking about the past, we might face fewer conflicts between us."

A frame from the movie "Freestyle to Montenegro". Photo courtesy: Ardit Sadiku

Albania to US, via Yugoslavia

Gjini had agonised over whether to flee.

"The decision to escape was very difficult, because it was either death or freedom," he told BIRN. If they had been caught, "the army would have executed us."

Family members left behind also faced the wrath of the state.

On arrival in Ulcinj, four people in uniforms took Gjini and the body of Gjeka to Podgorica, known then as Titograd. From there, Gjini was sent to prison in the coastal town of Kotor for a month for illegally crossing the border.

From Kotor, Gjini was taken to Belgrade, where he was interviewed at the United States embassy.

"There were about 30 other fugitives," he recalled. "Someone had fled through the mountains, someone from my line of work, someone from the army."<...