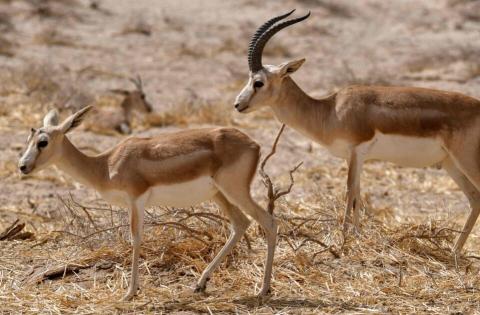 Gazelles at an Iraqi wildlife reserve are dropping dead from hunger, making them the latest victims in a country where climate change is compounding hardships after years of war.

In little over one month, the slender-horned gazelle population at the Sawa reserve in southern Iraq has plunged from 148 to 87.

Lack of funding along with a shortage of rain has deprived them of food, as the country's drought dries up lakes and leads to declining crop yields.

President Barham Saleh has warned that tackling climate change "must become a national priority for Iraq as it is an existential threat to the future of our generations to come".

The elegant animals, also known as rhim gazelles, are recognizable by their gently curved horns and sand-colored coats. The International Union for Conservation of Nature classes the animals as endangered on its Red List.

Outside Iraq's reserves, they are mostly found in the deserts of Libya, Egypt and Algeria but are unlikely to number "more than a few hundred" there, according to the Red List.

Turki al-Jayashi, director of the Sawa reserve, said gazelle numbers there plunged by around 40 percent in just one month to the end of May.

"They no longer have a supply of food because we have not received the necessary funds" which had come from the government, Jayashi said.

Iraq's finances are under pressure after decades of war in a poverty-stricken country needing agricultural and other infrastructure upgrades.

It is grappling with corruption, a financial crisis and political deadlock which has left Iraq without a new government months after October elections.

"The climate has also strongly affected the gazelles," which lack forage in the desert-like region, Jayashi added.<...