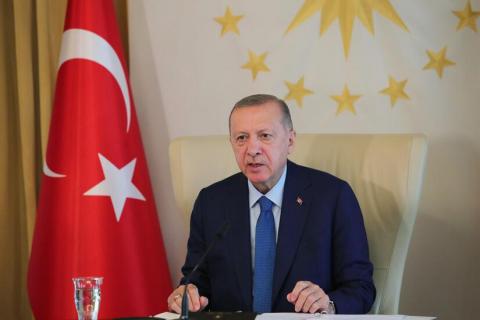 President Recep Tayyip Erdoğan has underlined that developed nations are hosting 2.7 refugees per 1,000, while underdeveloped countries are sheltering more than twice this figure, blaming them for using the global refugee problem as advertising material.

"The high-income countries host an average of 2.7 refugees per 1,000 people, while middle- and low-income countries host 5.8 refugees, according to United Nations figures. Those who use the few hundred refugees they have accepted as advertising material take no responsibility in the face of the deepening humanitarian crisis," Erdoğan said, addressing in a video message for the Global Parliamentary Conference on Migration on June 20.

Erdoğan said Türkiye welcomed 3.6 million Syrian refugees who fled from the conflicts in Syria and did not reject anyone who came to the border because of their ethnic identity, religion, culture, disposition and sect. "We are the country that has been hosting the most refugees in the world for the last seven years," he said.

"We have opened our doors to millions of people who have been persecuted in the last 500 years, especially the Jews who fled the Inquisition. Our brothers in the Caucasus and our compatriots in the Balkans always took refuge in Türkiye as a safe harbor when they were in trouble," he noted.

Economic problems triggered by the COVID-19 epidemic have pushed more people to leave their homes, Erdoğan stated, informing the current number of migrants worldwide has reached 275 million, the number of displaced persons approaching 85 million, and the number of refugees nearing 30 million.

Erdoğan also criticized Greece for "persecuting, robbing and even murdering" refugees and said...