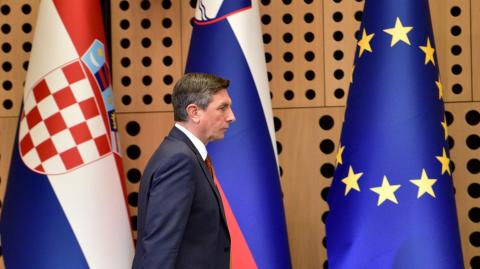 The move has reawakened fears in the Western Balkans that the region could be left behind as the EU focuses on fast-tracking war-stricken Ukraine and its neighbour.

"The goal of Slovenia's proposal to grant Bosnia and Herzegovina the status of a candidate for EU membership without delay is to immediately send a positive signal to Bosnia and the entire Western Balkans region," says the document that Slovenia will present to the meeting of EU leaders.

"Such a signal for Bosnia, the opening of accession negotiations with North Macedonia and Albania, as well as visa liberalisation for Kosovo, would reaffirm the EU's commitment to the Western Balkans," it adds.

Slovenian President Boris Pahor raised this proposal at the Munich Security Conference on February 22 and has returned to the idea three times since then.

Bosnia must first adopt the laws listed in the Political Agreement accepted by Bosnian party leaders in Brussels last week, in order to open accession negotiations.

Former Croatian prime minister Jadranka Kosor said the EU should try to keep a balance, commenting on the European Commission's recommendation of candidate country status for Ukraine and Moldova.

"Giving a green light to Ukraine, it [the EU] completely neglected one area and in a way humiliated it. First of all, I am thinking of Bosnia and Herzegovina, which also had a bloody war," Kosor told the media, referencing Bosnia's 1992-5 war.