Brnabic on Hrkalovic's accusations: When the institutions do their job, I'll do mine 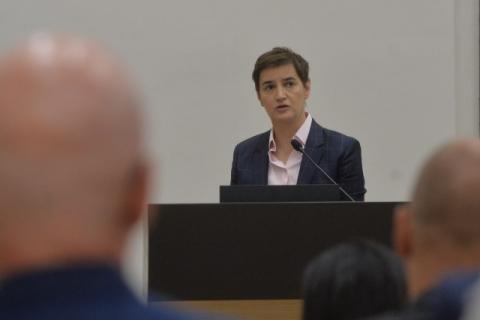 She stated that it was the job of the prosecution.
"It used to be that the parties decide who will be arrested, convicted and blackmailed. The SNS is not that party, but a party that is here to build institutions of the Republic of Serbia and implement reforms in the field of rule of law," Brnabic said.
When asked what she will do about the accusations against Stefanovic, she reiterated that she believes in the institutions, that she said that before, and she says now.
I believe in the state and institutions, Brnabic said in a comment to journalists that she is the prime minister, and Stefanovic is sitting in the government.
"As soon as the institutions do their job, I say again I believe in the rule of law, as soon as the institutions do their job, I will do mine," she said after a ceremony at the University of Belgrade's Faculty of Dentistry, the 74th anniversary of its founding, being granted on that occasion with Implant Research Center with laboratories and educational center, unique within Balkans.