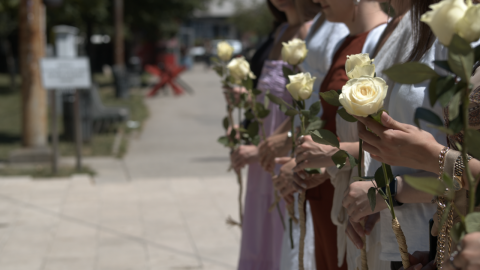 The Forgotten Children of War association and a group of young Bosnian women laid flowers on Tuesday in tribute to children killed during the 1992-95 war in Sarajevo and in the neighbouring city of East Sarajevo.

They also displayed placards spelling out the words: "They were just children. Together we can build bridges for the future."

The tribute was part of a project called 'Symbols of the Lost Past', which is aimed at building a new culture of remembrance,as well paying tribute to children killed in the war. It is supported by the RECOM Reconciliation Network, which campaigns for a cross-border truth commission for the Yugoslav wars.

"Only a constructive and critical relationship towards the past of one's own people, but also an appreciation of the suffering of other peoples in Bosnia and Herzegovina, can contribute to creating a culture of remembrance and mutual appreciation and respect," said Mirna Omercausevic, programme manager of the Forgotten Children of War association.

"They were just children. Together we can build bridges for the future." Photo: Forgotten Children of War.

One of the participants in the project, Isidora Trivkovic, said it was important to learn about what happened during the war in Bosnia and Herzegovina and to remember the children who died.

"We sent a clear message that young people in our country want to live in peace and love. We must not let the past repeat itself, and only together can we build bridges for the future," Trivkovic said.

"By paying tribute, we are expressing respect towards those who were killed, compassion and empathy for the families, while at the same time [the...