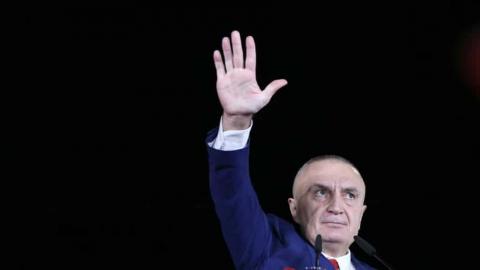 Meta described the announcement as "absurd news" but said it would not distract him from his duties as a president until July 24, when his mandate ends.

On June 7, Valteri filed a criminal complaint against Meta, his wife Monika Kryemadhi, who is the head of the Socialist Movement for Integration, LSI party and a former speaker of parliament, and Iraklis Fidetzis, the administrator of a Cyprus-based company, Dorelita Limited.

The claims relate to a lobbying contract between the McKeon Group, a US consulting and lobbying firm, and the LSI in 2017.

On June 16, Valteri filed a second criminal complaint accusing Meta, his wife and some LSI officials of refusing to declare assets, corruption and money-laundering. The complaint cites a contract between the party and Global Security and Innovative Strategies, a US security consulting and investigative firm.

The LSI, which in 2016 was in government in coalition with the Socialist Party, hired the US firm to improve its image in Washington, for a monthly retainer of $30,000.

The contract, according to documents made public by the US Justice Department, said the consulting firm was meant to be "educating United States governmental officials… regarding the LSI's commitment to implement justice reforms, enhance Albania's economy, strengthen security approaches and...