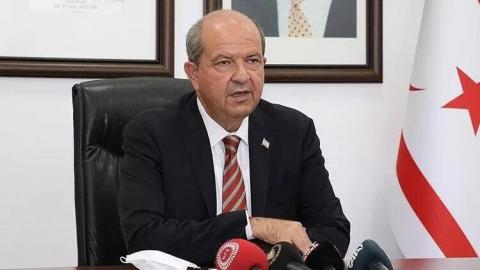 Turkish Cypriot President Ersin Tatar criticized the activities of the Greek Cypriot administration while speaking at an event in Kyrenia on June 19.

"Although Greek Cypriots talk about peace and neighborly relations, they continue their discontent and immoral activities against Türkiye," he said.

Tatar strongly condemned the participation of the Greek Cypriot journalist Lazarov Mavros, a PKK sympathizer whose name was found on the fake passport that the Greek Cypriot administration gave to PKK terrorist leader Abdullah Öcalan before he was caught, in the Greek army.

"What they are doing is inhuman, immoral," Tatar added.

He also commented on the activities of Greece against Türkiye.

"Greece believes that it will besiege Anatolia by arming the Aegean islands and spreading its activities to the eastern Mediterranean, but this will never happen," he said.

According to a written statement by the Turkish Cyprus Presidency, Turkish Cypriot President Ersin Tatar invited British Prince Edward and his wife, Sophia, for a social meeting, expected to come to the Greek Cypriot administration today.

It was noted that both Tatar and Prince Edward were graduates of Cambridge University in the invitation sent to the British embassy under the Greek administration, and it was stated that an informal visit would be beneficial. However, the invitation was declined.