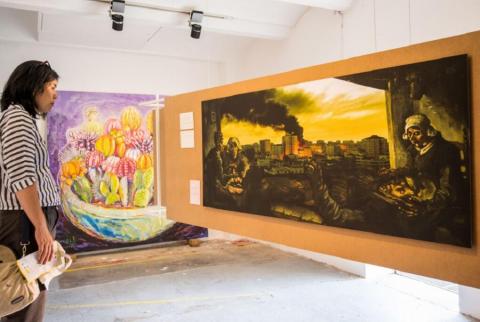 Break-ins and vandalism, accusations of racism and anti-Semitism and a giant compost heap: Documenta, one of the world's biggest art fairs, opened under a cloud of controversy.

The exhibition, which turns the sleepy German city of Kassel into the center of the art world once every five years, kicked off on June 18 after months of bitter rows.

"Documenta has always been a place of exchange and heated debates," Hesse state culture minister Angela Dorn said ahead of the 15th edition.

Over 100 days the wildly disparate works of more than 1,500 participants will be displayed at 32 sites across the city, with more than one million visitors expected.

For the first time since its launch in 1955, the show is being curated by a collective, Indonesia's Ruangrupa.

The group's decision to turn the spotlight overwhelmingly on artists from the Global South rather than Europe or the United States has opened up the event to a much broader range of perspectives.

"Documenta promises to be radical, from who is invited to the art, to the venues," its director Sabine Schormann told reporters.

However the inclusion in particular of a Palestinian artists' group strongly critical of the Israeli occupation has sent sparks flying.

An anonymous blog posted by an "Alliance Against Anti-Semitism Kassel" in January accused the collective called The Question of Funding of having links to the BDS boycott Israel movement.

BDS was branded anti-Semitic by the German parliament in 2019 and barred from receiving federal funds. Around half of Documenta's 42-million-euro ($44-million) budget comes from the public purse.