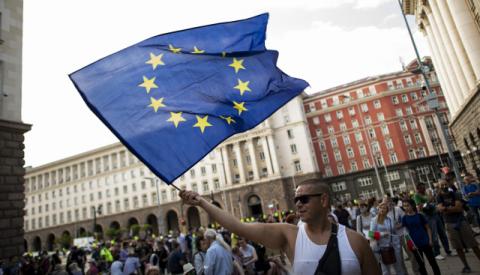 Bulgaria is the only EU member state to have a decline, albeit a slight one, in the percentage of people who think the Union is a good thing. Almost half of Bulgarians have a positive attitude towards China and Russia, and over 50% have a negative attitude towards the United States.

These are the results of a special Eurobarometer survey for the spring of 2022.

Almost two-thirds of Europeans consider EU membership a good thing, the highest result since 2007. Exceptions are Greece and Slovakia, where more respondents consider it "neither good nor bad".

Compared to the last survey of the European Parliament from the end of 2021, the results of this indicator have increased significantly in most member states, while in Bulgaria there is a slight decline of 2 percentage points - to 47%.

Nearly half of the Bulgarians surveyed - 49 percent, have a positive view of the EU, which is a decrease of 2 percentage points compared to the end of 2021.

Attitudes about the benefits of EU membership

Russia is rated positively by only 10% of Europeans surveyed. China has the second-lowest score of 22%. Europeans have a more positive attitude towards Britain - 65%, followed by the United States with 58%.

Bulgarian respondents also have a high positive attitude towards the United Kingdom - 62%.

At the same time, almost every second Bulgarian evaluates Russia and China positively at the moment, while the prevailing evaluation of the United States is negative - 53% vs. 40% positive.

Also, two-thirds of the respondents in our country believe that maintaining the prices and costs of living is a more important...