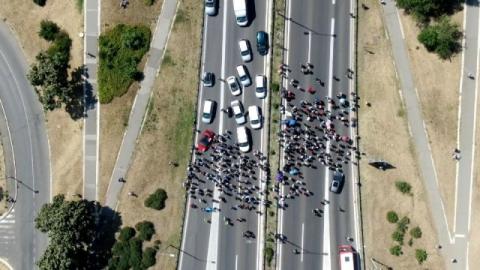 As B92.net has learned, the workers rejected the Prime Minister's proposal to come to the Serbian Government for talks today at 4.30 p.m.
First, they asked for a severance pay of 1.000 euros per year, and today they are asking for 2.000 per year, which is 10 times more than other workers in Serbia receive.
They rejected Fiat's proposal to receive 17.000 euros, a minimum salary of 800 euros a month and to have a guaranteed job when they return to Serbia.
Some workers of Kragujevac's "Fiat" arrived in Belgrade in several buses to protest. As they say, they decided to block the Gazelle bridge.

Politicians from the "Moramo" coalition, Biljana Stojkovi, Dobrica Veselinovi, Aleksandar uta Jovanovi, Neboja Zelenovi, as well as People's Party officials Stefan Jovanovi and Miroslav Aleksi welcomed them in front of the Sava Center.
Prime Minister Ana Brnabi said yesterday that Fiat workers in Kragujevac decided to take to the streets and organize protests instead of continuing negotiations with the Government, and told them that they could always contact her to continue the talks, but not through the media.
"I am here, they know where I am, I am there for them, day, night, weekend, whatever... I do not see what they are looking for on the street instead of in the Government," Brnabi said.

She said that Fiat workers did not wait for the process of applying for a job abroad to be completed.
"We want the workers to be satisfied, to provide for those families, but before the application process was completed, they came out and said that negotiations with the government were over. I cannot force anyone to talk and negotiate," the prime minister said. When asked by journalists what workers can expect...