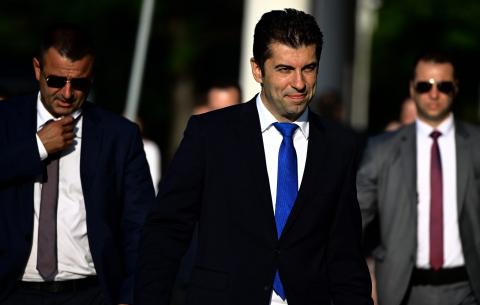 Bulgarian Prime Minister Kiri Petkov (C) leaves the parliament after the end of the debate on the vote of no confidence in Sofia, on 21 June 2022. Photo: EPA-EFE/VASSIL DONEV

Of the 240 MPs in the chamber, 123 voted to oust the ruling coalition comprising "We Continue the Change", Democratic Bulgaria and the Bulgarian Socialist Party.

Kiril Petkov said after the vote: "It was an honour for me to lead a government that was taken down by [oligarch and Movement for Rights and Freedoms MP] Peevski, ["There's Such a People" leader] Trifonov, [fomer PM Boyko] Borissov and [Russian ambassador] Mitrofanova. This vote is only a small step on own long way ahead. We'll continue this battle."

President Rumen Radev is expected to first hand a new mandate to "We Continue the Change" and if new coalition talks are unfruitful, the mandate will go to GERB, the dominant party between 2009-2021, currently in opposition and seeking a comeback.

A pro-Petkov protest was expected to again take place in Sofia later on Wednesday, while smaller anti-coalition demonstrations are also planned.

On Wednesday, oligarch and MP Delyan Peevski, sanctioned under the Magnitsky Act and mentioned in the Pandora Papers for his offshore assets, attended an anti-government protest, which was smaller than the one supporting the coalition.

All action in the parliament was saved for the actual vote, as earlier on Wednesday no member of the opposition - GERB, the Movement for Rights and Freedoms, Revival or former coalition partners "There's Such a People" - appeared for the regular sessions in the morning, so a quorum was not reached.

The no-confidence vote follows the government's steady loss of a majority in the chamber.