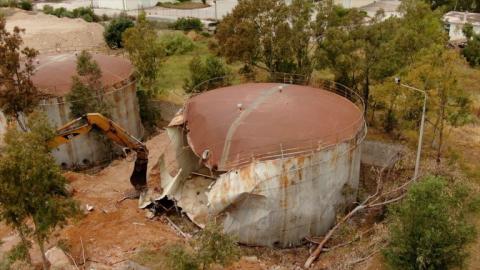 An ambitious pioneering decontamination project, unique in Greece and one of the largest ever carried out in Europe, was launched by Lamda Development with the goal being the elimination of all possible sources of surface, soil and groundwater pollution from the Ellinikon project.

The decontamination project is indicative of Lamda's philosophy for "green", sustainable development, which is the core of the emblematic renovation of the former airport serving the principles of sustainability and environmental protection. The project is considered unique due to its size and the environmentally friendly methods used.

The characteristic of this innovative project is that no soil will be removed. The contaminated soil will be refurbished, either in the bioremediation cell being built within Ellinikon or by bioaeration and in-situ treatment. Any potential source of pollution will be removed, treated with innovative methods and used as fuel or raw material in industries, further reducing the environmental footprint of the project.

The total cost of the work will be fully covered by Lamda. Internationally recognized companies Antipollution and Intergeo are the contractors of the project, which is expected to be completed in a year.

Will Erdogan back off on veto of Sweden, Finland NATO membership at summit?
My big fat Greek baptism – Zach Galifianakis becomes a godfather in Crete (photos)