Ex-PM Borissov: Kiril Petkov allows himself to Lie in Brussels 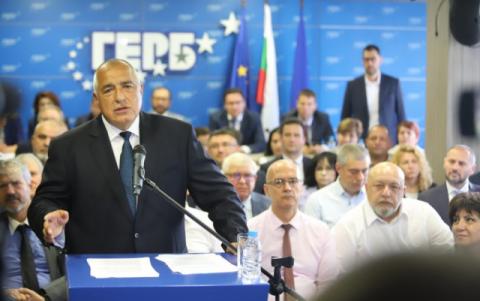 Representatives of GERB together with the chairman of the party Boyko Borissov gave a statement to the media.

"The text of the French proposal for a negotiating framework with the RNM is very good", said former Prime Minister Boyko Borissov.

"I believe in Macron and the EC, GERB was established as a party for the European development of Bulgaria. Yesterday I heard from brave folks how they were not afraid ... The Prime Minister and the ruling majority make difficult and unpopular decisions when upholding a principle, and the principle is that at the moment the Euro-Atlantic partners want the enlargement of the Balkans. I can't imagine a Prime Minister - the most important topic for Europe, for America, for us, he hasn't even read it! And yesterday he lied again that he would go to a council and accuse someone of interfering with his work. Why is this fear, isn't he a brave one", Borissov asked.

The ex-PM added: "He forgets that we have many friends in the west and they tell us that Petkov will hide until we do what is necessary. We are not so brave, but we know how to look after our work and take care of our partners. And here I agree with Radev that the French presidency has provided the best framework."

Borissov said he had spoken to GERB lawmakers to give the green light to North Macedonia and Albania.

"So, Petkov must convene a meeting of the Council of Ministers immediately, to make proposals, to come to parliament", Borissov said.

Borissov also read the announcement of yesterday's decision by the Holy Synod, which said the BOC welcomed the...