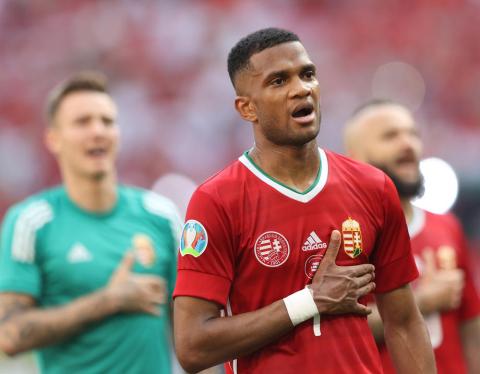 Following this game in November 2020, after initial scepticism over his selection, Nego quickly became a cult hero in Hungary. The name Hajdu had christened him with, "Lajos" - the nearest Hungarian equivalent to Loic - became widespread among Magyar fandom.

Yet Nego's rise to Hungarian stardom isn't an ordinary story. Born to a Guadeloupean family in Paris, Nego arrived in Hungary for the first time in 2013 to play for the Budapest club Ujpest. Either side of an unsuccessful 12-month spell at Charlton Athletic in England, Nego has been one of the Hungarian league's top players and now plays for Fehervar in Szekesfehervar.

Though he's learning, Nego doesn't yet speak fluent Hungarian. In fact, in Hungary's famous 1-0 over England on June 4, three of Hungary's 11 players who finished the game aren't fluent Hungarian speakers. Callum Styles's grandparents moved to England during the Hungarian Revolution of 1956; Willi Orban was born in Germany to a Hungarian father.

In world football, naturalisation has been part of the game for decades - one of the game's greatest players, the Hungarian Ferenc Puskas, played for Spain in the latter stages of his career. But never has it been pursued as assertively as it is being today by the current Hungarian authorities.

Foreign footballers who play in the Hungarian league are regularly tipped to play for Hungary as they near citizenship qualification. And this naturalisation policy speaks to a wider strategy within Hungarian sport - that of a true integrationist outlook.

Hungary's sole gold medallist at the 2022 Winter Olympics in February, Shaoang Liu, is from a Chinese-Hungarian family. His brother, Shaolin Sandor Liu, was part of the four-person team that won Hungary's first-ever Olympic gold...