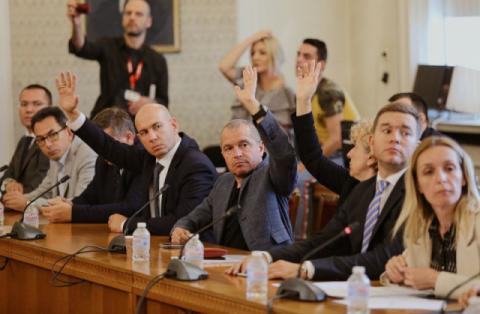 At the suggestion of DPS and GERB and with the support of "There Is Such a People" and "Vazrazhdane", the meeting of the parliamentary commission, which was to hear Foreign Minister Teodora Genchovska on the French proposal for negotiations with North Macedonia, was postponed.

Thus, the new parliamentary coalition, which is being formed around the removal of Parliament Speaker Nikola Minchev, continues its joint activities and will probably vote together on the no-confidence vote submitted by GERB tonight.

The Commission had to hear the opinion of the Ministry of Foreign Affairs and be acquainted with the package of documents.

Stanislav Atanasov from the Movement of Rights and Freedoms (DPS) suggested, at first, that the commission should not even discuss anything: "There is nothing more to learn, let's postpone the commission until there is a proposal for a decision from the Council of Ministers."

Atanas Mihnev of "We Continue the Change", who is deputy chairman of the foreign commission, suggested: "Let's hold this hearing, and the minister is here anyway, to acquaint the public with the success what has been achieved."

Former Foreign Minister Ekaterina Zaharieva (GERB) said the prime minister's decision to submit the proposal to the parliamentary committee was unconstitutional because it had to be submitted to the Council of Ministers first. At the same time, "There Is Such a People" (TISP), President Rumen Radev and GERB accused the prime minister of holding secret talks. "We have been waiting for days for this meeting to be convened. Why was this meeting convened today and not over the weekend if it was so urgent? What is happening here is some kind of circus and crisis PR, the foreign minister cannot...