After the Western Balkans Meeting: There is Still 50% Chance of a Deal with Bulgaria 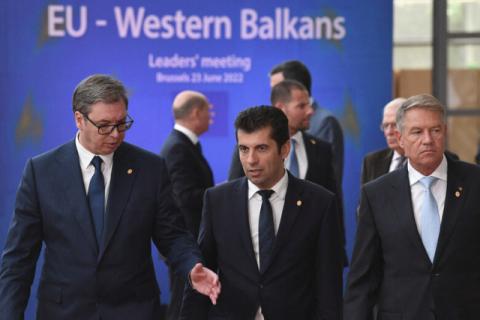 "You are a complete mess. Shame! Today is a good day in Europe, but not in Bulgaria." This final assessment of the Albanian Prime Minister that there was no decision to lift the Bulgarian veto at the European Union-Western Balkans meeting today was repeated several times in front of journalists by Edi Rama.

The meeting ended as expected - without a decision by the leaders of the 27 countries to start negotiations with North Macedonia and Albania and a conclusion by Reuters that their colleagues from the six countries of Southeast Europe had "left empty-handed".

In fact, this is not entirely true. Because the Prime Minister of the Netherlands, one of the most adamant opponents of enlargement in the current negotiation format, said that there is still 50-60 percent hope for a breakthrough next week, i.e. by the end of the French Presidency of the Council of the EU on 30 June.

"Nothing is easy in the Balkans, but in this case, they think we can see a 50 or 60 percent chance of a breakthrough next week," Mark Rutte was quoted as saying by Reuters about the dispute between Sofia and Skopje.

A European Council began in the evening in Brussels, at which leaders discussed whether to grant candidate status to Ukraine and Moldova, as recommended by the European Commission. Both countries applied less than four months ago (i.e. after the Russian invasion of Ukraine) and, according to Rutte, "there is enough progress for such a decision". "But for negotiations to begin, a lot of work still needs to be done. Georgia is one step behind them," he explained.

According to French President Emmanuel Macron, who is the rotating president of the EU Council, he told reporters after the meeting with the...