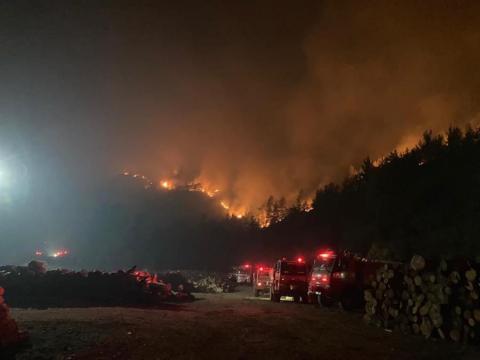 More than a thousand firefighters, aided by water-dropping planes and helicopters, on June 22 battled a wildfire that erupted overnight near a popular resort in southwestern Türkiye forcing dozens of home evacuations.
An official voiced hope that the blaze _ one year after the worst wildfires in Türkiye's history _ was close to being tamed but urged caution due to the strong prevailing winds.

The fire erupted Tuesday evening in the Bördübet region, near Marmaris on Türkiye's Aegean coast. It spread rapidly, fanned by strong winds.

Smoke filled the orange-tinted sky over Bördübet, video footage from the area showed, and authorities evacuated dozens of homes near the region as a precaution.

The smoke made its way over to the Greek island of Rhodes - a short ferry ride from Marmaris, where a plume was visible over the sea and extended over a part of the island, just south of the city center.

Authorities were investigating the cause of the blaze, including the possibility of arson.

Turkish President Recep Tayyip Erdoğan inspected the area by plane on Wednesday, while Vahit Kirisçi, the agriculture and forestry minister, told reporters that the fire had been "largely" contained. He also said however, that he was making his remarks with "some caution."

"Of course, it is possible that it may jump from one place to another due to the wind," he said.

1,600 personnel were involved in efforts to bring the fire under control, including teams brought in from neighboring provinces. A total of 20...