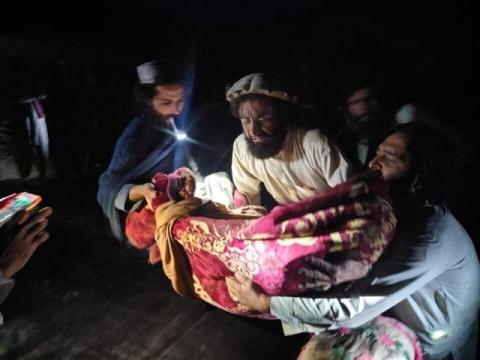 The quake had a magnitude of 6.1 on the Richter scale, and the final number of victims and injured is still unknown because it is not known how many people were buried in the rubble. Therefore, it is feared that the total number of victims could be significantly higher, reports the BBC.
The quake destroyed more than 3.000 houses, and about 6.000 people were rescued last night from the affected areas.
The quake affected the southeastern province of Paktika, and the United Nations is trying to provide emergency shelter and food aid to everyone.
Taliban spokesman Zabihullah Mujahid announced on Twitter that eight trucks with food and other necessities had arrived in the endangered area of ​​Paktika from Pakistan, as well as two planes with humanitarian aid from Iran and Qatar.
However, despite the appeal of the Taliban, who now rule Afghanistan, to help them out, a "cold shower" arrived from the United Nations. Namely, that international body announced last night that the UN does not have enough capacity to search fpr and rescue people in Afghanistan.
The UN believes that Turkey is currently in the best position to provide assistance to Afghanistan.
On the other hand, South Korea announced aid package to the victims of the earthquake, amounting to one million-dollar. The Japanese government also plans to provide assistance to Afghanistan, its spokesman Seiji Kihara said today, adding that the government is coordinating moves to quickly provide the necessary support. Rescue efforts are hampered by heavy rain and a lack of funds.
Organizing more direct international aid would be difficult, as many countries, including the United States, send humanitarian aid through the UN and other organizations to avoid sending money directly...

Ankara aims swift conclusion of the F-16 sale from US

World Cup fans will only get beer outside stadiums