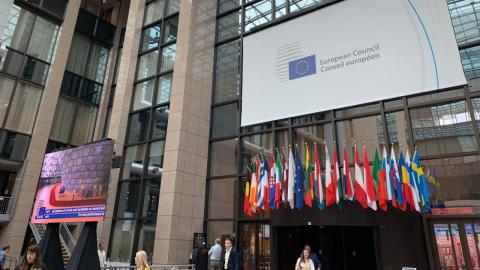 "The European Council has decided to grant the status of candidate country to Ukraine and the Republic of Moldova," the document says.

The European Council is also ready to grant candidate country status to Georgia, once the priorities specified in the Commission's preview opinion "on Georgia's membership application have been addressed".

"The future of these countries and their citizens lies within the European Union," specifies the European Council document.

There are no special conditionalities for Ukraine or Moldova.

On Georgia, the European Council recommends that, "in accordance with Georgia's law, candidates must meet the priorities specified in the Commission's report to ensure that Georgia is independent".

Moldova officially applied for the EU membership on March 3 following the Russian invasion of Ukraine.

The European Council specifies that each country's progress towards eventual European Union membership will depend on its own success in meeting the so-called Copenhagen criteria, considering the EU's capacity to absorb new members.

Regarding existing candidates in the Western Balkans, the European Council recalled the importance of further reforms, notably in the rule of law, particularly those related to the independence and functioning of the judiciary and the fight against corruption.

Szijártó: "It's a shame for Brussels"