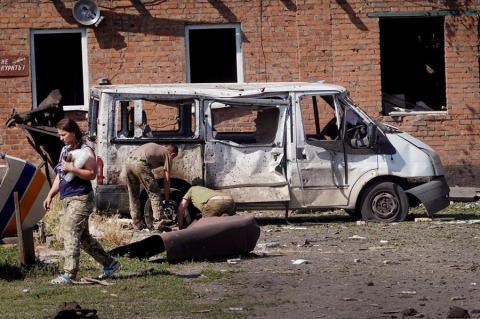 EU leaders will gather in Brussels on June 23 to discuss calls to formally grant war-torn Ukraine "candidate status" to join the bloc, as Russian forces slowly advance in the eastern Donbas region despite fierce resistance from Kyiv's military.

Ukrainian President Volodymyr Zelensky said he had been conducting a "telephone marathon" on his country's behalf in the run-up to the meeting, making his case to 11 European leaders on Wednesday alone.
"We are preparing for the historic decision of the European Council. There are only a few hours remaining before it," he said in his daily address.

But while the European Commission-backed candidacy is widely expected to be approved, some members have been lukewarm about Ukraine's status, and any accession process is likely to take years if not decades.
On the ground in eastern Ukraine's Donbas, massive Russian bombardments are making life "hell", Kyiv said Wednesday, while insisting its soldiers would hold on "as long as necessary".
Moscow's troops have been pummelling the battleground Lugansk region and the strategically important city of Severodonetsk for weeks and are slowly advancing, despite fierce resistance from the outgunned Ukrainian military.
With President Vladimir Putin's forces tightening their grip on Severodonetsk, its twin city of Lysychansk -- located just across the Donets river -- is now coming under heavier bombardment.

Taking the two cities would give Moscow control of the whole of Lugansk, allowing Russia to press further into Donbas.
"The Russian army is... just destroying everything" in Lysychansk, Sergiy Gaiday, governor of the Lugansk region, which includes both cities, wrote on Telegram.
"It's just hell out there," after four months of shelling in...