Foreign Media: Bulgaria may Lose Millions and Not Join the Eurozone 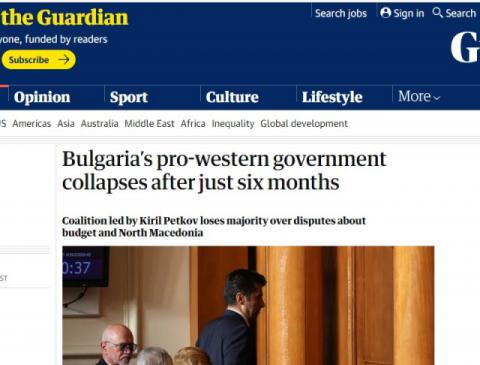 Prime Minister Kirill Petkov blamed the mafia and Russia for the fall of his reformist government, foreign media reported after the first successful no-confidence vote in Bulgaria, which toppled the cabinet yesterday.

"Bulgarian Prime Minister Kiril Petkov has blamed Russia and the influential mafia in his country after his government lost a no-confidence vote Wednesday. Petkov, who came to power just six months ago, was elected with a promise to fight the growing corruption in the country and urged Sofia to take an unusually firm stance towards Russia after the invasion of Ukraine", writes Politico.

"Bulgaria's pro-Western government collapsed in just six months," the British Guardian newspaper reported. "Petkov, a 42-year-old Harvard graduate who has vowed to fight corruption, has taken a firm pro-European and pro-NATO stance since Russia's invasion of Ukraine - an unusual position for a country traditionally friendly to Moscow. Analysts predict that the new government will pursue a more neutral policy towards Russia."

The Guardian adds that the fall of the cabinet puts at risk millions of euros from the EU's Recovery Plan and entry into the Eurozone. The Associated Press and Deutsche Welle make the same prediction.

According to the Financial Times, a no-confidence vote could ruin EU enlargement and lift the veto on North Macedonia. "The overthrow of the Bulgarian government is a blow to hopes for EU enlargement. Prime Minister Petkov has been ousted in a no-confidence vote that threatens an agreement to lift the veto on North Macedonia's accession talks," the paper said.

"Kiril Petkov blames the Russian ambassador and three politicians for his resignation," the...