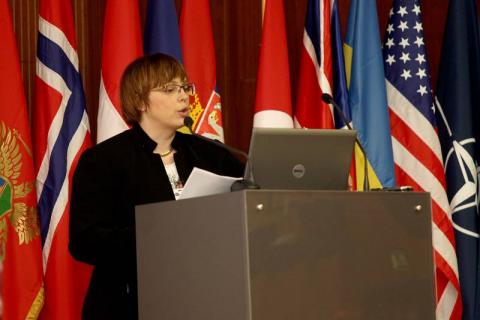 Ljubljana – Lawyer Nataša Pirc Musar, best known in her former role as information commissioner, has announced she will enter the presidential race in the autumn election as an independent, becoming the first candidate to formally announce her bid.

“For several years I’ve had this desire to do something in Slovenian society and politics and the role of president would fit like a glove,” she told the press on Thursday.

“I’ve done a lot in life and an currently at the peak of my powers. I’m 54 years old, I may as well do something for Slovenia,” the self-described liberal said.

Pirc Musar, who has long had a prominent presence in the media and on social media as a commentator of current affairs, is convinced that the president of the republic must state their opinion “loud an clear,” in particular in difficult times.

Her candidacy has so far been backed by more than a dozen prominent individuals, including former presidents Milan Kučan and Danilo Türk.

Holding a degree in law, Pirc Musar started her career in TV and worked as a journalist and news anchor for more than a decade.

She briefly did PR in the corporate sector and the public sector between 2001 and 2004, when she was elected Information Commissioner, a position she held for two terms.

In 2014 she became an attorney at law and has had her own law firm since.

While Pirc Musar is the first person to announce a run for the presidency, the ruling Freedom Movement have tentatively picked their candidate as well, former diplomat Marta Kos.

The incumbent, Borut Pahor, is term-limited.