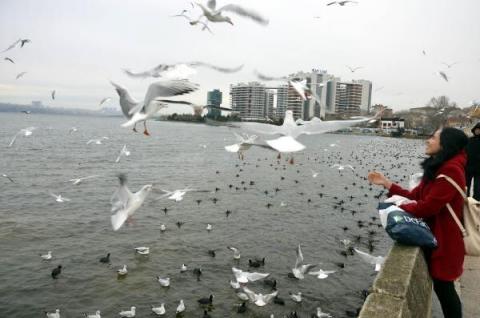 There are nearly 1.4 million water birds from 104 species in 135 wetland areas across Türkiye, according to a report issued by the country's Agriculture and Forestry Ministry.

The ministry recently released the "2022 Mid-Winter Water Birds Counts" report, which was created following the observations conducted between Jan. 16 and Feb. 13.

"For the counting, some 135 water lands, including [Türkiye'nin second biggest lake] Lake Tuz, Lake Manyas, the dams of Atatürk and Birecik and [Istanbul's] Lake Küçükçekmece were selected," said the report and added: "The aim of the counting is to monitor the water lands, compare the differences in numbers of birds over the years and prepare action plans for the endangered bird species."

According to the report, an exact number of 1,396,369 water birds were counted in 2022 in the mentioned water areas.

The report did not remark the reason behind the increases and decreases in the numbers, but pointed out that wild goose, teal duck and black-headed gull were the most counted species in the water lands in 2022.

Among the endangered species, the report said, "Only one from each, lesser flamingo, slavonian grebe, calidris ferruginea, have been counted in the water lands."