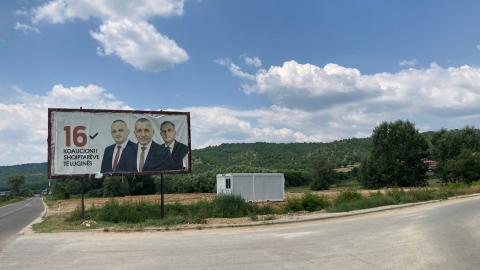 "Everyone likes to stay in his own place, his home, but here people do not see any prospects," Salihi says.

Sitting in the village café in front of the community office, Salihi says the large ethnic Albanian diaspora keeps life in the village ticking, thanks to their remittances.

In the village, he says only cafés and other small businesses concentrated alongside the long narrow main street offer jobs - for the lucky few. The luckiest of all have family ties with the owners. "Here, we barely survive," he says.

However remote and impoverished, Veliki Trnovac is back in the limelight, however, with yet another election process on Thursday.

It might not make much difference to Salihi's daily struggle, but it means everything to Shaip Kamberi, a prominent ethnic Albanian politician in Serbia.

The former journalist and human rights advocate switched to politics a decade ago, and has since been mayor of the town of Bujanovac and the only ethnic Albanian MP in Serbia's parliament.

On Tuesday, Kamberi stops his car in front of Trnovac community office to be greeted by the villagers.

On Thursday, he faces voters' scrutiny yet again in a marathon process which has seen Serbia's parliament unable to be constituted until the results come in from one small polling station in Veliki Trnovac.

This will be the fourth time in three months that voters are called to show up at the polling station in the village's Muharrem Kadriu elementary school.

"As far as I can remember, there has never been another case in Serbia where elections had to be repeated for a fourth time," Kamberi says.