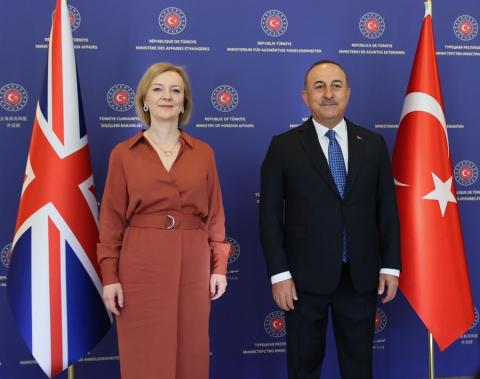 Türkiye continues efforts with the United Nations, Ukraine and Russia to ensure the export of Ukrainian grain to the world markets, Foreign Minister Mevlüt Çavuşoğlu said on June 23.

"We see this plan of the U.N. as a realistic plan, we see it as feasible. For this reason, we strongly support it, and we find it important in terms of the legitimacy of this process," he said, speaking at a joint press conference with his British counterpart, Liz Truss.

For her part, Truss said the U.K. and Türkiye work together to get the grain out of Ukraine. Welcoming Türkiye's "leading role" in efforts to open a grain export corridor from Ukraine, Truss underlined the urgency of the grain crisis. The problem will have devastating consequences if not solved within the next month, she added.

If an agreement is reached in a meeting to be held in Istanbul soon, then there would be a control center to be established and a safe zone out of the Ukrainian territorial waters will be opened, Çavuşoğlu said.

Asked about allegations regarding stolen grains from Ukraine, Çavuşoğlu said these claims have been expressed by Ukraine from time to time.

They are taking seriously claims and investigating the country of origin of all mentioned products which allegedly arrived in Türkiye, but Ankara determined that those products were labeled Russian, the minister explained.

Ankara is against the illegal buying and selling of Ukrainian grain whether by Russia or any other country, he stated.

Türkiye has "full determination" on the matter, and Ankara will not allow entry of such grain, Çavuşoğlu added.

The minister also said Türkiye has close dialogue and close relations at all levels with its strategic partner, the U.K.

Stating that the U...