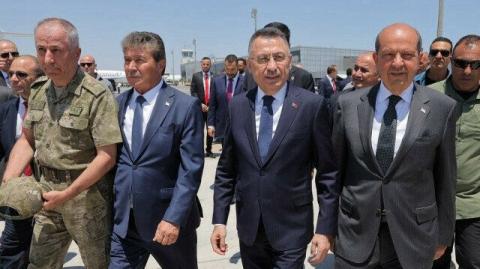 Turkish Vice-President Fuat Oktay, speaking on a visit to Turkish-occupied Cyprus, threatened that Ankara will dispute sovereignty over Greece's Aegean islands if Athens does not swiftly demilitarise them, removing all defences.

Nearly 40 percent of the Republic of Cyprus has been under Turkish occupation since the July-August, 1974, Turkish invasions, which Ankara dubbed a "peace operation". The northern part of the island was ethnically cleansed of its Greek-Cypriot population.

"The person who arms the islands of the Aegean, blatantly violating international agreements, is the prime minister of a country [Greek Prime Minister Kyriakos Mitsotakis]. If demilitarisation of the islands is not completed as soon as possible, we shall dispute the sovereignty over the islands in the framework of international law and treaties," Oktay declared.

Though Turkey has long been demanding that demilitarisation of the Greek islands, this is the first time that a Turkish official has demanded that it be done poste haste, signalling a significant escalation of threatening, bellicose rhetoric.

The statement also constitutes a thinly veiled threat that Ankara could conceivably land on one or more islands if Athens does not comply with its demands, as according to Turkey, if Greece's sovereignty is not legally grounded, the islands would revert to the successor state of the Ottoman Empire.

Since the 1970s, Turkey has deployed its so-called Aegean Army, now with 130,000 active troops and a huge landing force, all along the coast of Anatolia, a stone's throw away from the Greek islands, to which it poses a continual threat, which is indeed its purpose.<...